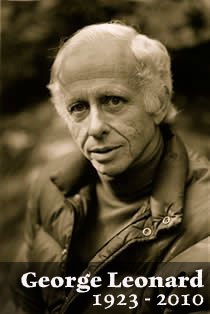 This is a work which in a very interesting way, answers the question, what is the goal, what is the purpose of education? What should students walk away with after elementary education? Secondary education? Short courses, online degrees? What exactly is it that educators should be trying to transmit? George Leonard's answer is: "the achievement of moments of ecstasy." (p. 17), and he quotes Einstein: "It is in fact nothing short of a miracle that the modern methods of instruction have not yet entirely strangled the holy curiosity of inquiry." (p. 231). According to Leonard, "the master teacher is one who pursues delight." (p. 232); "to follow ecstasy in learning in spite of injustice, suffering, confusion and disappointment is to move easily toward an education, a society that would free the enormous potential of man." (p. 234)

The author quotes the work of a University of North Carolina researcher, Dr. Harold G. McCurdy, who studied the childhoods of 20 historical geniuses. He found three common factors:

McCurdy concludes that "the mass education of our public school system is, in its way, a vast experiment on the effect of reducing all three of the above factors to minimal values, and should, accordingly, tend to suppress the occurrence of genius." (p. 113) Thus, the underlying thesis of George Leonard"s book is that the public schools in their present form suppress human genius and produce students who are "usable components in the social machine" but "just about finished" as learners. "Only the inefficiency of the present school system and the obdurance of certain individuals can account for the creativity, the learning ability that survive after age twenty-five." (p. 113).

Given that compulsory mass education is an "experiment," educators may well be indicted for breaking the principles outlined in the Nuremberg Code for research involving human subjects:

This is a book from the '60's era, a time when free schools were being developed; it was published during the same year of the Berkeley "summer of love." George Leonard is an interesting person; he is currently an Aikido master with a school on the west coast. (Aikido is a martial arts discipline). He also continues to lecture and write books. He is associated with Esalen Institute and Michael Murphy.

This is a remarkable, magical book in many ways; the introductory materials tell the story of the author's visit to a traditional, public school, and his psychic interaction with the students there. 'It is an exacting and exhausting business, this damming up the flood of human potentialities.' (p. 1). He talks about teachers being actors:

Retiring behind a psychic proscenium arch, the actor-teacher is forever safe from the perils of education. His performance flourishes. He plays for laughs and outraged looked. Phantom applause accompanies his trip home to his wife and he cannot wait to go on stage again. Assured of a full house and a long run, he knows he critics will be kind. Those who give him a bad review will get a failing grade. (p. 2).

The principal gives him a "little tour around the plant" until, finally, they arrive at a classroom where a "stout maiden" presides, and suddenly

There is a witch in the room. I see her near the back of the fourth row. Dark eyes and dilated pupils are fixed on me now, bold and direct, telling me that she knows, without words, everything that needs to be known about me. I return her stare, feeling that this girl, with an education she is not likely to get, might foretell the future, read signs, converse with spirits. In Salem she eventually would suffer the ordeal of fire and water. In our society she will be adjusted.(p. 4).

Leonard offers alternatives to traditional schools: "Visiting Day, 2001 A.D." and the following chapter, "We Find Johnny," describe a sort of free school on the Montessori model, with computerized learning systems and interactive learning modules. The children at the proposed school are gathered in a grassy area, reading Thucydides' The History of the Peloponnesian Wars, acting out the parts of the Athenians and the Melians. At one point, the children break down crying, several of them sobbing audibly, because they don't understand war. "Don't worry about it," one of their parents tell them, "Anyone who can relive the Peloponnesian War or any war without crying is somehow defective. Something's lacking." (p. 172).

Emotionally, this chapter is the heart of the book. Unfortunately, that date (2001) has arrived, without the changes in pedagogical technique and human sensibilities the author envisioned. Once again, the world has refused to conform to the wishes of some thinker's conception of what the world should be and will become. Leonard's predictions were wrong, I'm sorry to say, though one hopes that some day, the idea of war will become so foreign that young children are overcome with sadness and incomprehension at its reading. Unfortunately, contemporary children are so immune to violence that it is quite unlikely that a reading of any such book would bring tears.

Rather than being an ecstatic, joyous, and lifetime quest, education primarily continues to serve the needs of a society for "reliable, predictable components." (p. 120) The principle purpose is "narrow competition and eager acquisition." (p. 121) Leonard writes of

the male bias of education [and how] in order for young men to bear the conditions of war or colonization, it was necessary that they reduce their imagination and self-awareness to a minimum. Stereotyped behaviors were trained by close-order drill in the classroom. Slogans justified the behaviors. "To die for Rome is noble" said more for Rome than for the Roman soldier's. If it is true that the battle of Watterloo was won on the playing fields of Eton, it is also true that some of the players' sensibilities were lost there. (p. 123).

The author postulates that this competition, acquisition and aggression is increasingly inappropriate, given current socioeconomic conditions on the planet, and can be reduced by the schools. I've had this book for many years, and always return to it, in hope and wonder; one can only read or reread a book of this sort as a sort of brace to one's underlying theoretical position regarding education. Whether future pedagogues will manage to replace aggression with ecstatic learning, I would not venture to predict, but I profoundly hope that it will happen.